Toronto, Ontario – Aurvista Gold Corporation (“Aurvista” or the “Company”) (TSX-V: AVA, OTC: ARVSF) announces the results from two ground Induced Polarization (“IP”) surveys completed in Q1-2015, as well as thirteen regional IP surveys which have now been interpreted as a continuation of the Company’s ongoing Generative Program (the “Program”) at the Douay Gold Project (“Douay”).

Geosig Inc. (“IOS”) of Quebec City (Quebec) was contracted for the two IP surveys under the supervision of Mr. Yvan Bussières. P. Eng., Aurvista’s lead consultant for the Program, who completed the interpretation. The ground surveys were combined with the eleven IP surveys done over the years at Douay and were interpreted into a single database (refer to the appended Figure 1). IP and the other geological-geophysical components of the Program will be essential in identifying any new mineralization and new exploration targets at Douay.

The recently completed 68.6 new line-kilometer IP survey covered gaps in geophysical data in the extreme NW corner of Douay and the western end of the previously defined Porphyry Zone. The Porphyry Zone sector hosts the majority of the lower grade gold mineralization at Douay and overlaps with the newly defined base metal target area west of the South Porphyry. Results from both sectors show a match between IP and the previously interpreted airborne Magnetic and EM-INPUTTM surveys (Figure 1; refer to the Company news releases dated April 8, 2015, and December 16, 2014).

As part of further expanding the generative work, the Company will initiate a lithogeochemical study which will assist in defining primary lithologies and secondary alteration gradients induced by hydrothermal-related processes for gold and/or base metal mineralization. Lithogeochemistry will be crucial in vectoring towards potential new mineralization along the 20 km length of the CBDZ on Douay. Aurvista will uniformly cover Douay by re-sampling drill core from 26 North-South project-wide sections at 500 meters to 750 meters intervals, analyzing this core for major and trace elements with complementary petrography, and finally alteration-mineralization vectoring. The work is ongoing and expected to be completed in Q4-2015.

The technical contents in this news release have approved by Mr. Jean Lafleur, M. Sc., P. Geo., President and CEO for Aurvista Gold Corporation, a Qualified Person under National Instrument 43-101.

About Aurvista Gold
Aurvista Gold Corporation is a junior gold exploration and development company with 69,511,617 shares outstanding trading on the TSX Venture Exchange in Canada and OTC Pink Sheets in the U.S. Aurvista's only asset is the Douay Gold Project now totaling 287 claims for 145.3 km2. Of the total, 32 claims for 11.9 km2 form the North West Zone and are in a joint venture with SOQUEM (75% Aurvista, 25% SOQUEM) and 5 claims for 0.2 km2 are in joint venture with S.E.M. Vior Inc., (90% Aurvista, 10% Vior). The project is located along the gold-bearing Casa Berardi Deformation Zone in northern Quebec. Details can be viewed on the Company’s website at www.aurvistagold.com.

This email address is being protected from spambots. You need JavaScript enabled to view it. 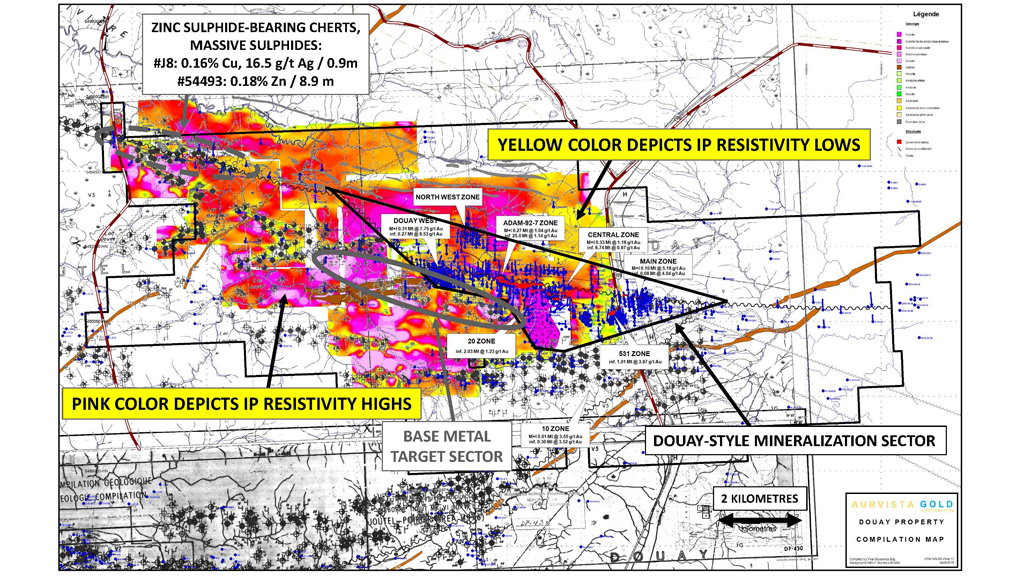