Montreal, Quebec: Aurvista Gold Corporation (“Aurvista” or the “Company”) (TSX-V: AVA, OTC: ARVSF; Frankfurt: AV2) announces the completion of an Airborne Magnetic-Time Domain Electromagnetic-Radiometric Geophysical Survey (the “Survey”) (refer to the Company news release dated June 14, 2016) and the release of Survey’s result, in addition to an update of the Company’s on-going Detailed Targeting Program at its 100% owned Douay Gold Project (“Douay“) with drilling planned for Q4-2016 and Q1-2017.

Geophysics focused on Douay’s central and western portions and was primarily designed to define key contacts and faults which could be linked to the gold mineralization, their extensions and outline potential gold-bearing massive sulphides within 2 km of the porphyry unit, all to a depth of -150 meters, within the 10 km long by 3 km wide Douay-Style Mineralization (“DSM”) corridor. Previous geophysical programs identified a number of EM-INPUTTM anomalies that are consistent with massive sulphide development as discovered elsewhere in Quebec-Ontario segments of the Abitibi Belt.

In 2014, Aurvista completed a Geophysical Interpretation (the “GI”) of the 1976 government electromagnetic-magnetic (“EM”) INPUTTM survey, the 11 ground Induced Polarization (“IP”) surveys completed from 1986 to 2011, and the Company’s 2011 airborne magnetic and the 2 ground IP surveys from 2015 (refer to previous Company news releases dated December 17, 2014, and April 8 and April 30, 2015). The GI assisted in identifying additional targets with similar geophysical signatures to those associated with already known gold mineralization on Douay.

The interpretation confirmed the DSM corridor comprising of a SE-tilted parallelogram-shaped block, bounded in all directions by SE-NW and NE-SW splay faults of the E-W trending Casa Berardi Deformation Zone (the “CBDZ”). The DSM consists of a unique geophysical response of chaotic, non-linear, and distorted bands of strong magnetic highs and complementary lows resulting from the faulting, shearing, and alteration of the host rocks. The 8 known higher and 2 lower grade gold zones within the DSM occupy magnetic lows and are surrounded by strongly magnetic basalts and gabbros. The GI also showed potential outside the DSM for additional significant and untested gold and base metal mineralization along the 20 km trend of Douay. EM INPUTTM clusters of conductors were identified and require further testing to confirm potential massive sulphides based on the geological-geophysical association.

IP can help identify disseminated sulphides and faults potentially linked to the gold and/or VMS mineralization. The IP at Douay showed a complex array of crisscrossing E-W, NW-SE and NE-SW faults mirroring structures outlined by the airborne magnetic survey. The array forms anastomosing patterns, and as in the case of the heavily tested Douay West Zone, the gold mineralization appears to sit at the junction of anastomosing faults. Where narrower linear IP resistivity lows occur they are overlapped by similar linear EM-INPUTTM anomalies, and correspond to conductive linear and recessive graphitic faults typical of the CBDZ. Discrete groupings of EM INPUTTM anomalies located in felsic and mafic volcanic rocks are associated with areas of higher IP resistivity, likely a non-graphite component to the conductors, such as sulphide-bearing cherts, as observed within the 6 km by 1 km EM INPUTTM grouping running westwards from the South Porphyry.

Aurvista contracted Prospectair Geosurveys of Gatineau (Quebec) to complete and airborne helicopter magnetic, time-domain electromagnetic (“TDEM”) and radiometric survey to complement the 1976 EM-INPUTTM and 2011 magnetic survey but at greater depth. A total of 1,421 line-km were flown along N-S 150 m spaced lines with the magnetic responses mimicking those from the Aurvista 2011 magnetic survey. The Total Counts per Second (“CPS”) of the radiometric portion of the Survey maps out 3 areas of shallow overburden (higher CPS) with felsic rocks either “granites”, porphyries, cherts and/or rhyolites-rhyodacites (“1” to “3”), 8 linear troughs (lower CPS) linked to possible faults (“4” to “11”), and the N-S esker (higher CPS) (“12”) under the Amos-Matagami provincial highway (higher CPS).

The TDEM survey outlined 7 strong anomalies (“A” to “G”), all associated to the strongest EM-INPUTTM anomalies, 4 in proximity to the CBDZ (“A” to “D”), NW of the DSM, and 3 in proximity to, and surrounding the ‘South Porphyry” (“E” to “G”), S of the DSM (refer to Figure 1 using the following link). Characteristics of each anomaly is summarized in the following table:

To summarize, Anomaly “E” is the most significant, located in proximity to the gold bearing “Main Porphyry”, the “South Porphyry” and the “Adam-Porphyry”. There are chlorite-sulphide bearing “feeder pipes” nearby as observed in drill holes DO-92-24 (refer to Figure 2 using the following link) and DO-11-34, typically found in association with massive sulphide mineralization, yet to be found at Douay. The historical drill holes DY-99-04, 05 and 06, 46878-0, 46899-9 and 0, 64487-0, 468880-0 and D-92-32 skimmed the anomaly by drilling above or holes were too short, but explained the conductive source as graphite. There is no graphite in the re-logged drill core.

Aurvista is committed to the continued exploration of Douay

The Company is well advanced in its previously announced 2016 two-staged exploration campaign on Douay with the primary objective of defining drill targets to increase known Mineral Resource estimates*.

The First Stage of the campaign, slated for completion in Q4-2016, will tackle Priority Targeting (the "Program") in two areas, the DSM and 6km by 1 km EM-INPUTTM sector, where management is confident additional gold mineralization will be discovered. The Second Stage will consist of 4,000 metres of drilling to delineate additional gold mineralization.

The Aurvista exploration team is now focused on core re-logging of previous and historic drill holes along 26 sections across Douay, including all previously known gold mineralized and non-mineralized segments, with the purpose of defining the chemical signatures and alteration mineralogy of the known gold mineralization. The purpose of this work is to confirm the suspected source of the volcanic intrusion. This work integrated with the geophysics will assist in vectoring the drills towards additional gold mineralization and the drilling of the best priority targets that could potentially lead to a better quality and expanded mineral resource. To date, drill core re-logging of 45,000 meters of the nearly 200,000 meters of drill core of site stored from all previous vendors is presenting a much simpler geological picture than previously interpreted.

Douay now consists of a northern corridor of fairly pristine, well preserved volcanic tuffs of felsic to intermediate compositions; the central 3 km wide DSM corridor hosting the CBDZ with a mix of porphyries, basalts, felsic volcanic rocks and iron formations, and gold-hosted shear zones; and a southern corridor of mostly basalts with siliceous-chemical sediments and chlorite-sulphide bearing feeder-pipes, both typical of VMS systems.

There are well defined continuity of geological units and structures across Douay as was suggested by the previous 2014-2015 geophysical interpretation which has now been confirmed as the iron rich host of the “Douay West” Zone, west of the “South Porphyry”, was also observed E-SE of the same porphyry for a distance of 4+ km. The E-W fault or shear zone hosting “Douay West” is the same structure hosting the “Adam-Porphyry”.

The volcanic stratigraphy trends in a NW-W to E-SE directions whereas the gold structures trend E-W. There are at least a dozen of these subparallel structures. The previously held interpretation of 8 independent higher grade gold zones is incorrect. Management believes there are additional higher grade zones and are linked by an extensive network of E-W, NW-SE and NE-SW structures in magnetic iron rich volcanic rocks, but now non-magnetic sulphide bearing, hosting iron-carbonates alteration, porphyries and/or silica-rich alteration and/or sodium-rich alteration.

Aurvista Gold Corporation is a junior gold exploration and development Company with 90,689,121 shares outstanding trading on the TSX Venture Exchange in Canada, the Frankfurt Stock Exchange and OTC Pink Sheets in the US. Aurvista’s only asset is the Douay Gold Project, consisting of a 100% owned interest in 250 contiguous claims totaling 133.1 km2, plus a 90% interest in 5 contiguous claims totaling 0.2 km2 and a 75% interest (25% held by SOQUEM) in 32 contiguous claims totaling 11.9 km2. In total there are 287 claims covering 145.3 km2 located along a 20 km segment of the Casa Berardi Deformation Zone in the prolific Abitibi Belt of northern Quebec. Douay is located 40 km SW of the Matagami Zinc Base Metal Camp and 150 km N of the Val-d’Or-Malartic Gold Camp (both in Quebec). 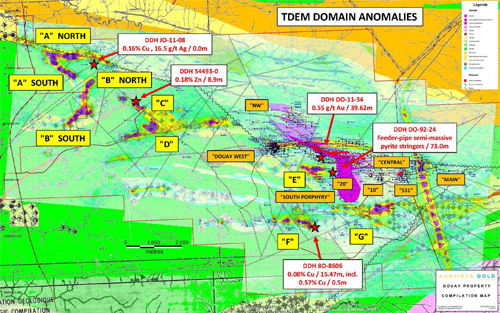 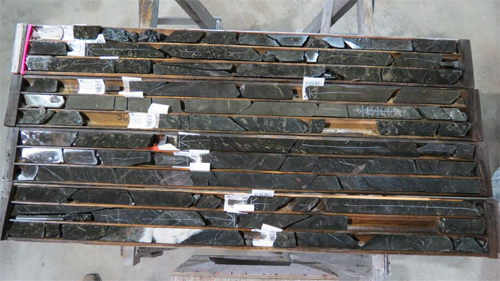